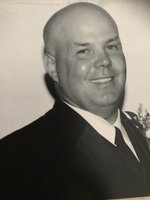 It is with great sadness that the family of Scott Ralston announces his passing on April 6, 2020 at the age of 51. Scott passed away unexpectedly in Collingwood Ontario where he resided with his family. On April 6th I lost my best friend, the father of our children, my soul mate. He wasn’t supposed to go this early. I guess God had other plans. Scott lived his life for his family. He had such a special bond with his children, his family and his friends. In the words of his best friend “he was fiercely loyal to those he cared about” Scott grew up in Moorefield Ontario. He lived with his wife and children in Kitchener for several years before moving to Killarney Ontario and lastly to Collingwood. A celebration of Life will be held later (to be announced) when the world returns to normal. Scott will be lovingly remembered by his wife Debbie (Carriere) Proud Dad of his son Parker and daughter Rennée. Cherished Son of Robert (Bob) Ralston (predeceased) & Dianne (Helmka) Wonderful son in law to Jeanne Carriere & Tony Boisvenue Brother to Robert (Barb), Mary (Peter), Tom (Stephanie) A loving uncle to his nieces and nephews and a friend to many He loved you all in his own special way He will be deeply missed