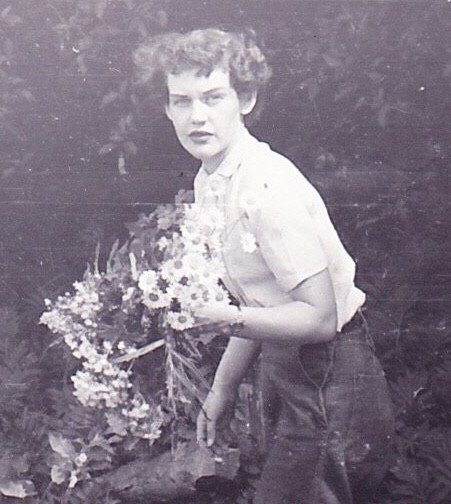 It is with great sadness that we announce that our feisty and indomitable mother, Lenore Sigurlaug (Johnson) Chick passed away after a lengthy illness at age 93. We are so sorry that her last few months were so fraught and that we could not alleviate her pain. Our sincere hope is that she can now rest in merciful peace.

Lenore is survived by Sheila, Errol, and Caitie; Kris and Pat; and Derek, Elaine, Alex, and Rachael. She was predeceased by her husband, Tom, and son Geoff. She will be missed by various members of the Jones family, especially Judy and Shen, and extended family from coast to coast.

Lenore was born in Gimli, Manitoba, the seventh of 11 children. Being raised in a largely Icelandic community during the Great Depression had a major influence on her character - she was resourceful, resilient, determined, and fiercely independent. She was a gifted seamstress, knitter, and embroiderer. Her skill and love of handicrafts led to a career as an Occupational Therapy Assistant and she had a wonderful rapport with people in her care, in both hospital and community settings. Although macular degeneration robbed Lenore of her ability to create, she loved to follow curling on television and read audio books. Her legendary organizational skills allowed her to remain independent well after she had lost her vision.

Lenore will be remembered by all who knew her as an intelligent, creative, and complex person with a great sense of humour. Her keen interest in world events allowed her to keep abreast of activities in all parts of the world and what she did not know, she made up. She had a special bond with small children and delighted in her grandchildren. Those aware of her medical history know she had more lives than any cat. We thank everyone who cared for our mother for their compassion, particularly her long-time nurse, Christine, the PSW team at Trinity Place, especially Brenda and Sarah, and more recently, the staff at Chelsey Park. If so inclined, we would ask that you take special delight in the innocence of a child, admire the artistry of a handmade item, or take the time to talk to an elder.

Share Your Memory of
Lenore
Upload Your Memory View All Memories
Be the first to upload a memory!
Share A Memory