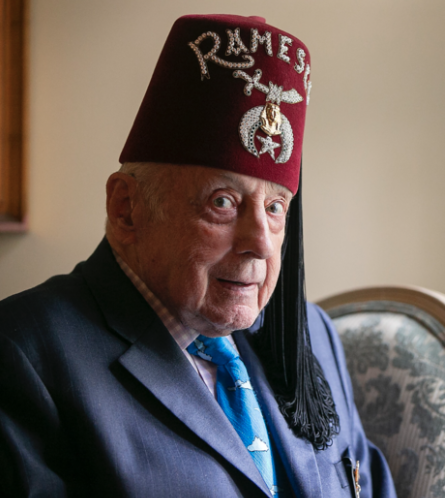 Please share a memory of Ralph to include in a keepsake book for family and friends.
View Tribute Book

Having travelled millions of miles, in nearly as many automobiles of great pride, Ralph Duncan Hutchison's remarkably strong engine of 95 years peacefully faltered, leading to life's off ramp with his beloved Shriner's Black Camel on February 28, 2020 in London Ontario.

Father to David, Sandra Marie, Wendy and Bruce. Grandfather to Scott, Kim (Marc), Jenna and Amanda (Jose), g'pa to Amelia, dad was predeceased by our wonderful mother Irene Helen (McKay) in 1995 and their young daughter Sandra in 1961, along with his elder brothers George and Jack and their parents Dorthy Allan and David.

Following our mom's passing, dad began a kind, caring relationship with Lenore Carty who brought much warmth and sparkle to his life, (and David's family too); cruising the Caribbean many times and engaging in a little wine and socializing at his Kleinburg condo.

Prior to their Woodbridge home, our parents lived on Etobicoke's Benbow Road, after returning to Toronto in 1960 from Peterborough where David and Sandra were born. There, having been the local General Mills salesman, dad purchased Millard's Sporting Goods with his eldest brother George.

Finding "the store" couldn't support two growing families, dad began a local sales career with Duro Test Lighting before accepting a management promotion and the Toronto move about 1960. He left after 12 years to start a SMI motivational training business, then onto manager of the Willowdale Canadian Tire store, followed by commercial lighting sales with Osram Sylvania until his mandatory retirement in 1989.  He then was an independent lighting consultant for some years.

Throughout his life dad was a most determined, self motivated, man of action in every aspect with integrity, unique humour, good will, generosity...and stubborn impatience as those close to him thought too!

Dad enjoyed socializing with many friends, including those in the now defunct ACT, the Toronto Board of Trade and Woodbridge United Church, as well as many family gatherings often taking place at Swiss Chalet, Cora's or the Mandarin, along with many family reunions with mom, and later Lenore.

The Peterborough Masons, followed by the Toronto Rameses Shriners with their red fezzes, especially his friends of the Royal Order of Jester Court 83, were an important thread throughout his life. Dad took great, quiet pride in the Shriner's charitable work for their children's hospitals and his involvement in many ways.

Of particular note was his generous donation, for the 4th floor nurse's station during the rebuild of the Shriner's only Canadian Childrens hospital, where he attended its 2015 opening celebration in Montreal with many family members. (Surprisingly they actually took VIA Rail then!)

A future gathering with friends for good wishes, remembrance and mirth at the Rameses Temple hall is under consideration post coronavirus. Until then, be safe, be kind and of good cheer while offering a toast to dad's memory, or enjoying a butter tart, a favourite anytime. (Kit Kat bars too!)

As you wish, any memorial donation for the 4th floor cardiac monitor fund can be directed to the Shriner's Hospitals for Children - Canada, 1003, boulevard Décarie, Montréal, Québec H4A 0A9, c/o Andrea Poupart (514) 282-8545, or online. Memories and donations can also be shared at affordablefuneraloptions.ca

Share Your Memory of
Ralph
Upload Your Memory View All Memories
Be the first to upload a memory!
Share A Memory